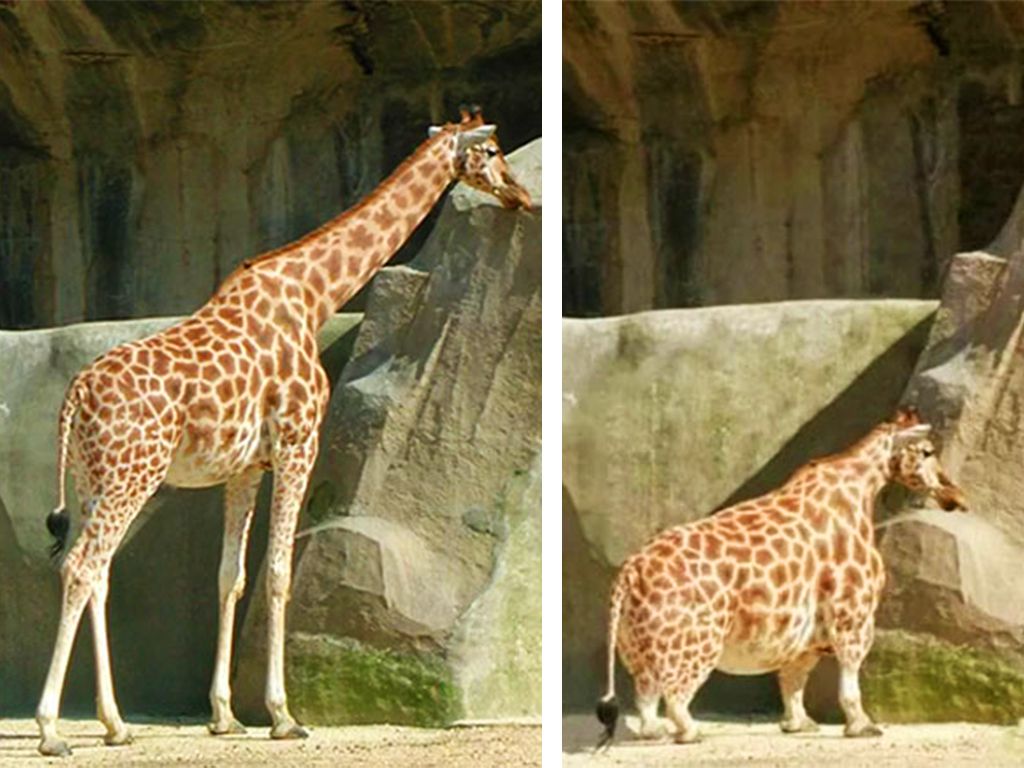 We’ve all come across a few photos while scrolling through our social media feeds that seem too good to be true. And sometimes, they really have been digitally altered to catch our attention!

From fruit hoaxes to falsified landscapes, some of the most popular images found on the web are actually completely fabricated. But can you spot a fake when you see it?

The Filming of MGM’s Iconic Lion

Film footage of a lion has been used for MGM films as early as 1916, but this photo has nothing to do with the iconic movie studio. It is actually a photo of a lion at an animal hospital receiving a much needed body scan.

The photo on the right depicting a cat with a very handsome mustache is actually a real photo, but some internet users thought that the kitten would look good with some matching eyebrows, so those were added on digitally.

This might look like an incredible show of strength and culinary mastery from a young chef, but in reality this man is just posing next to a fake wave that looks like fried rice. This prop is displayed at a food prop store in Tokyo.

This Epic Castle on an Island

This image, originally referred to as “Dream House” by its creator, digital artist Jan Oliehoek, was created in Photoshop. The photo won second place in the Worth 1000 website’s “Bizarrchitecture 7” Photoshop contest when it was originally posted.

This picture was obviously faked, but many people still share it on social media without realizing that. The force of the winds in any moving plane would be enough to blow the selfie stick out of this pilot’s hand!

Venice, Italy is Frozen Over

This photo is another Photoshop creation and it is actually a combination of two photos: one showing Venice, Italy and another showing the frozen Lake Bakail in Russia. Some people were quick to point out that if the waters in Venice did freeze, the water would not look that clear.

The original lion in this photo had the typical golden fur that you usually see, but someone used their Photoshop skills to make it look like this lion was actually a dark coated, unique creature.

Don’t worry for the safety of this man, this photo was completely photoshopped. Someone took a photo of a bear running down a road near Yellowstone National Park and a cyclist was added into the image later.

Dabbing came into popularity thanks to musical group Migos in 2015. So, how is it possible that a World War II soldier is doing the move? It’s not possible. This photo was actually taken on the set of the film “Dunkirk” in 2016.

Called the mysterious “moon melon” fruit, found only in remote parts of Japan, this blue fruit is actually just a photoshopped watermelon. But its bright blue hue was enough to fool plenty of people reposting this image for their friends to marvel at.

Marilyn Monroe and Elizabeth Taylor Together

Marilyn Monroe has often been edited into photos with other famous celebrities, like this one with Elizabeth Taylor and others with stars like James Dean and Elvis Presley. But sadly, this is a fabricated photo, even though it looks like the real thing.

Albert Einstein Cycling Away from an Atomic Bomb

This faked viral image is once again a photo that was made up of a photo of Einstein superimposed over a photo of a nuclear test site in Nevada. The photo of the explosion was actually taken a few years after Einstein’s death, making this photo even more impossible.

Paris Hilton obviously has a lot of money. But this photo of her spreading the message to “stop being poor” is totally fake. Her shirt actually read “stop being desperate” which is a little less harsh.

The photo on the right shows how this woman was actually standing, and to be honest, putting your bare foot onto a ledge in a public building is still pretty awkward. But it’s nowhere near as hilarious as doing a full on squat on that ledge.

A Photo Taken Just Before a Tragic Event

Internet users shared this devastating photo during the aftermath of the disasters of 9/11, but it was actually faked. Eagle-eyed viewers soon pointed out that the time stamp would be inaccurate based on the timing of the events of that day and shadows in the photo are missing.

Many people share this photo of India claiming that it was taken during Diwali, the Hindu new year celebration that celebrates the victory of light over darkness. The original image was shared by NASA but the photo (which was not taken during Diwali) was a black and white satellite image which was later edited to include bright colors and added lights.

The skull in this photo was added digitally. The original photo showed an archaeologist unearthing what seems to be a box, but the photo started gaining traction online when a fake skull was added, leading to the intrigue of people on the internet.

NASA Shuttle Breaks Through the Clouds

The original photo of this space shuttle breaking through the clouds is a bit more foggy and grey, as is typical of a day of normal weather. Adding a crisp blue sky and fluffy white clouds made the photo more eye-catching.

This stunning photo was created by light painter Darren Pearson, who posted the image to Facebook in 2013. It was created by taking a long exposure photo of a tree with blue flames painted around it and then photoshopping the lightning into the photo afterwards.

The Fairy Pools of Scotland

The light blue water and purple trees of the supposed Fairy Pools are actually a digitally altered shot of the Shotover River in New Zealand. Even though the actual river is a beautiful landmark, it didn’t go viral until it was edited into a Disney inspired utopia.

Boy Sleeps Next to His Parents Graves

This photo, taken in Syria, has not been digitally altered, but it was completely staged. The boy in the photo knew the photographer, but he was sitting next to some actual Syrian graves, which is chilling in its own right.

This mountain with all of the features of a tortoise doesn’t actually exist, but it was made using a photo of the completely real Pilot Mountain in North Carolina. The actual landscape is just as gorgeous, it just doesn’t look like any animal.

The College of Architecture and Planning

Fortunately for all of the people that worked on this building, this image is a total fake, but a hilarious one. It takes several people many hours to put up signage like this, so it’s likely that this error would be caught very quickly.

The clouds near the top of the photo were digitally altered, but incredible lenticular clouds like the one over the peak of the mountain do naturally appear, and look stunning on their own. The original photo depicts Mount Fuji in Japan and its beautiful clouds.

Moon Perfectly Balanced on a Skyscraper

This photo was taken by Mo Aoun, but someone decided that it would look better if the moon was perfectly balanced on the edge of that building, so they put it into Photoshop to create this viral image!