See a Guy Build a Guitar Out of 1,200 Colored Pencils

Camila Villafane
See a Guy Build a Guitar Out of 1,200 Colored Pencils March 13, 2020Leave a comment 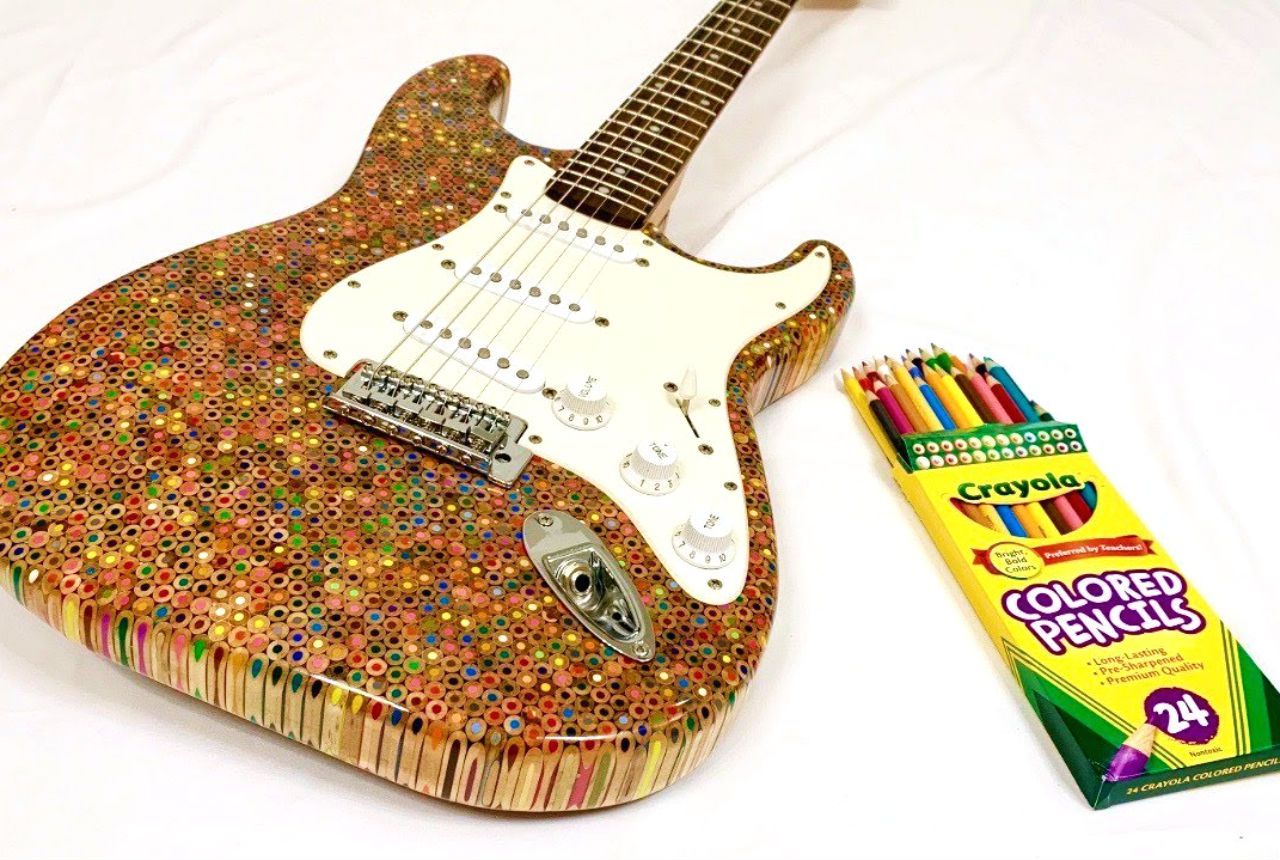 Electric guitars and colored pencils? Most of us can only use the latter to draw a picture of the former. But the genius behind YouTube channel Burls Art is crafty. So he built the former out of the latter. Instead of a typical slab of wood to form the guitar's body, he used hundreds and hundreds of colored pencils. But will a guitar made of colored pencils actually work? Or will it prove to be some sort of prop on the wall?

In the "about" section of his YouTube channel, the man behind Burls Art keeps it simple. "I try to make art that works," he writes. It's an understatement. But how can someone build a working electric guitar out of colored pencils?

The guy behind Burls Art started out by cutting all of his colored pencils in half using an electric blade in his workshop. He had 1,200 of them, and he intended to use all of them to create something totally musical. Cutting them up must've been hella fun. But that was only the first step.

He taped the bottom of a wooden box, then waxed the inside with carnauba wax. Once that was done, he placed the colored pencils inside the box, holding them together with epoxy resin. But he was also playing it by ear...

He admitted that he never actually built a guitar before, let alone an electric guitar made of colored pencils. But he was eager to give it a shot. So the next thing he did was to stack the colored pencils standing up, which was a painstakingly slow process. And that was still only the beginning…

He put on gloves and mixed the epoxy inside an all-purpose, 2-and-a-half-quarts mixing container. Then he poured the mixture on top of the colored pencils. Once that was done, he used a thin piece of cardboard to even out the epoxy.

Next, he cut a thin piece of cardboard, placed it on top of the epoxy-coated colored pencils and used barbells to apply pressure on top. Then he waited for about 24 hours to continue the next step of the project…

He flipped the cardboard boxes over and removed the screws from the bottom. Then he used a screwdriver and a hammer to remove the wooden panels that made up the box, until he was left with a shiny, solid slab of epoxied colored pencils.

He created a makeshift milling machine by using a router that helped him take an eighth of an inch or so off each side of the slab. The router rode on two pieces of wood that he could move around to cover the entire slab.

He tried filling in the pinholes with wood filler. It sort of worked. But he considered going back and doing it again once the shape of the body came into form. Speaking of shape, was he trying to make a rectangular guitar or what?

No, he used a piece of wood with the distinctive Stratocaster shape to trace an outline using a black Sharpie. This part was pretty easy, but the next part got a bit noisy and also a little messy…

The plan was to drill some holes around the outline. Then he used the jigsaw to connect the dots. It would have been easier if he had a table saw, but he didn’t. So he had to get more creative with the jigsaw.

Once he was done cutting the outline of the guitar body using the jigsaw, he pulled the excess pieces out. But the edges looked a bit jagged and uneven. So he took the next step to ensure the edges looked nice and smooth…

He passed the edges of the slab against the electric sander. But once he passed his fingers around the edge, he realized it was not entirely smooth. So he used a metal filer to sand away any extra imperfections. He had to do that part by hand.

He applied four strips of blue tape on the colored-pencil slab and added some glue. He also applied four other strips to the wooden template he used earlier to trace the outline of the guitar. Then he placed the wooden cover on top of the slab.

He used another sanding device to smooth the edges to match the template exactly. Then he needed to route the body cavity’s neck pocket and give the entire thing a round over…

While he sanded down the outline of the edges of the body to match the template, there was a minor mishap working at the neck pocket. He ended up with a bit of tearing that he decided to fix later.

To form the arm and belly contours, he sanded the slab with a belt sander. Experimenting on a discarded piece of the slab, he tried using a palm sander, but that just smeared the colors. He wanted to sand the contours up to about 800 grit. But 220 was the best he could do without smearing.

He preferred having clean colors and a few scratches with a smooth surface after he applied the clear coating. So, once he finished sanding, he fixed the damaged neck cavity we mentioned earlier. Then he used a two-part spray enamel to coat the whole shebang.

His Body Is Ready

He had to use almost the entire can of spray enamel. Once it dried, he did a little more sanding and a little more cleaning with a cloth, and the body was finished. But he still needed to add the finishing touches that would allow him to make music…

Putting the Electric in Electric Guitar

He installed the electronics, pickups, volume control and tone dials, etc. Then he attached a rosewood Squire neck. And you can’t make guitar music without a strings. So finally he installed strings one by one and tightened them.

Almost Perfect, But Not Quite

Even though he did an amazing job building an electric guitar out of colored pencils, he still wished he could have buffed it more. But if he had, he would have burned through the gloss coat. Still, the project wasn’t yet complete…

He could have added the back plate to cover the exposed electronics, but he left it off on purpose so he could show more of the color pencils. He wasn’t happy with the cheap Squier neck either, and remains hopeful he’ll be able to get a better neck down the line.

He plugged it in, took a seat, and gave his masterpiece a try. He played a small piece from the song “To God Be the Glory.” And if we’re being honest, it sounded really great. He did a nice job creating a playable and good-sounding homemade Strat-style guitar.

It’s not easy making an electric guitar out of 1,200 colored pencils, but Burls Art handled the project like a boss. And he played his little tune skillfully to prove that his masterpiece isn’t just for show and tell.