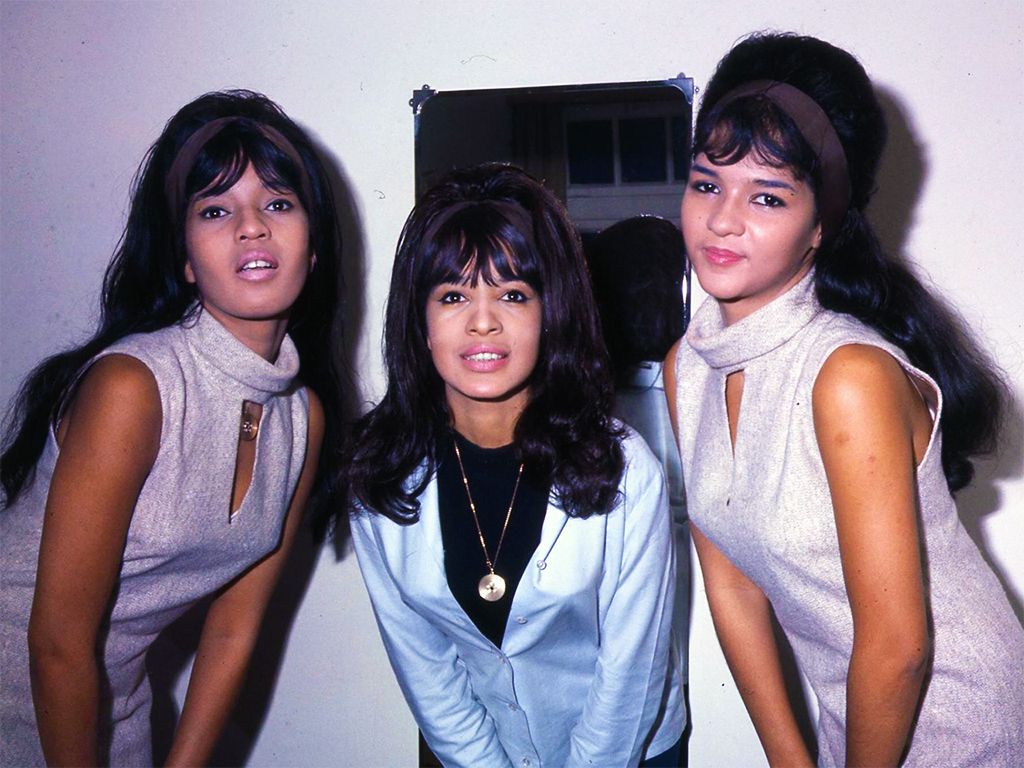 The '60s and '70s were a period of phenomenal fashion, music and movies, and some groundbreaking moments for world history. Here are some photos that show off just how groovy and stylish these decades were.

French cinema enjoyed a cultural boom in the '60s, and Brigitte Bardot was a large part of this boom. She made a name for herself playing emancipated, independent women; drawing attention from lay audiences and academics alike. In 1964, she visited Brazil, leading to this photo of her surrounded by fans.

Swedish pop stars ABBA became one of the iconic sounds of the 1970s. After winning the Eurovision Song Contest in 1974, the band achieved worldwide popularity. This photo comes from a 1979 performance in Edmonton, Canada. And in 2013, the band outsold The Beatles, with their "Greatest Hits" album selling more copies in the UK than "Sgt. Pepper's Lonely Hearts Club Band."

While Audrey Hepburn first broke out as a movie star in the 1950s, films like "Breakfast at Tiffany's" helped her continue her success long into the '60s as well. This photo of Hepburn on a boat comes from a photoshoot taken during a trip to Bürgenstock in Switzerland. Although she is now remembered for her iconic style, Hepburn didn't always think she deserved to fill the role of a fashion icon during her life.

The Jackson 5 was one of the most successful bands of the '60s. Formed of five siblings, the Jackson family toured the world. Here the Jackson 5 can be seen with five of their golden records, alongside producer Hal Davis.

Elton John released his debut album in 1969, and released an impressive thirteen albums over the next decade, sometimes releasing two a year. After his fame was established overseas, his albums were re-released for American audiences. Here he can be seen performing to a large crowd some time in 1979.

The Supremes Perform on "The Ed Sullivan Show" 17 Times

Here The Supremes can be seen performing on the "Ed Sullivan Show" in 1966. To this day, The Supremes are still America's most successful vocal group, having earned twelve Number One singles. Their success paved the way for other acts like the Jackson 5 and the Four Tops.

Jane Fonda was one of the best known actresses of the 1960s, appearing in such iconic movies as "The Chase" and "Barbarella." In the 1970s, though, Fonda also became known as a political activist, as she strongly opposed the Vietnam War. Here she can be seen at an anti-war conference in the Netherlands in 1975.

"Stairway to Heaven" Was the Most Requested Song on the Radio

Led Zeppelin formed in 1968 in London, with a sound that was heavily inspired by rhythm and blues music of the time, but which went on to set the stage for the heavy metal genre. And in the '70s, their hit song "Stairway to Heaven" was requested on American radio stations more than any other song, despite the fact that it had never been released as a single. This photo from 1977 shows the band on their final American tour.

David Bowie and Cher were both popular throughout the 60s and 70s. Both were known not only for their music, but for boundary-pushing fashion choices. Here the two can be seen performing together in a 1975 episode of Cher's self-titled variety television show. Bowie appeared on Cher’s variety show when he was just 28 years old, to promote his first Number One single in the United States, “Fame.”

The Bee Gees were popular throughout the 60s and 70s, but it wasn't until the advent of disco that they grew to their greatest height. This photo of the band performing on "The Midnight Special" in 1973 comes from before their disco era.

Marilyn Monroe Was Fired From Her Last Film

While Marilyn Monroe's star rose to prominence in the 50s, she transformed herself for the new decade when the 60s rolled around. Unfortunately, things didn't go well in this era. This photo was taken in 1962 on the set of "Something's Got to Give," a movie which was cancelled during production due to the star's ill health. Two months later, Monroe died.

Jimi Hendrix Was an Autodidact

Few people epitomized the 60s with quite the vigor of Jimi Hendrix. The musician is widely credited with creating the modern concept of rock and roll, and headlined Woodstock in 1969. What most people don't know is that he entirely taught himself how to play the guitar, making him an autodidact.

Mary Tyler Moore had a prominent career as a singer, dancer and actress, appearing in many roles on the stage and screen. This behind the scenes photo was taken on the set of her hit television series, "The Mary Tyler Moore Show."

Dolly Parton was famous for both country and pop music during the 60s and 70s, bouncing between genres in a way that would make Taylor Swift jealous. This photo from 1977 was taken at around the time Parton was working on her own variety show, "Dolly!"

A star of the screen and stage, Barbara Streisand proved talented at whatever she turned her hand to, whether it be movie musicals or pop music. This photo comes from a performance on "The Ed Sullivan Show" in 1969, the same year that she won the coveted Best Actress Oscar for her role in "Funny Girl."

Beatlemania was probably the largest cultural phenomenon of the 1960s, as The Beatles took the world by storm. Staying relevant in the next decade seemed effortless for the band, as their clean cut mod style gave way to a more experimental, colorful persona. This photo was taken while the band was filming the "I am the Walrus" scene for their made-for-television movie, "Magical Mystery Tour" before they embarked on a three-month long trip to India to take part in a meditation retreat.

Stevie Wonder Was in a Coma for 4 Days

Stevie Wonder's professional music career began when he was just eleven years old. He was a fixture of Motown during the 60s, but then evolved his own distinct funky sound during the 1970s. This photo from 1973 shows Wonder at the beginning of his "classic" period, which was effected by a small setback when he was involved in a nasty car accident that left him in a coma and resulted in a partial loss of smell and temporary loss of taste for the singer.

Joe Cocker Was Horrified with His Woodstock Performance

There was perhaps no event more groovy in the history of the world than the original 1969 Woodstock. Here, legendary musician Joe Cocker can be seen playing to a crowd of thousands of excited hippies, although in retrospect, he wasn't very happy with his performance, saying, "I actually saw myself – you know you see all your old stuff on YouTube now– and I was horrified at myself, with my arms just flailing around."

The eldest daughter of Frank Sinatra, Nancy Sinatra had an illustrious career as a singer and actress. She's perhaps best known for her iconic song, "These Boots Are Made for Walkin'." This photo comes from her 1967 television special, "Movin' With Nancy," which coincided with the release of her song "You Only Live Twice," which was featured in the 1967 James Bond film of the same name.

Natalie Wood and Ruth Gordon both starred together in "Inside Daisy Clover." This photo shows the pair at the 23rd Golden Globes, where Woods was nominated for Best Actress, and Gordon won for Best Supporting Actress.

In fairness, Neil Diamond wasn't just a prolific musician through the 60s and 70s— the singer-songwriter has remained popular up until his official retirement in 2018. Here he can be seen performing at the opening night of the Theater For the Performing Arts at the Aladdin Hotel & Casino in 1976, just a few years before he collapsed on stage in San Fransisco, needing emergency surgery to remove a tumor from his spine.

Sharon Tate Was "A Wonder to Behold"

This publicity photo for "Valley of the Dolls" shows one of the most famous faces of the 60s. Sharon Tate was a model and actress who appeared in various TV shows and movies throughout the decade, although they didn't always receive critical acclaim. Her murder in 1969 is widely credited as playing a pivotal role in the end of the traditional Hollywood movie system.

The Monkees Outsold The Beatles and The Rolling Stones in 1967

Originally envisioned as a clueless parody of The Beatles, The Monkees gained fame of their own thanks to a camp, silly comedy television series and a selection of songs composed by people who actually knew what they were doing. The result was a pop-culture sensation in its own right, even leading The Monkees to outsell the band they were based on!

The Ronettes Inspired a Generation of Hairdos

Popular in the 60s, The Ronettes were a girl band specializing in cute pop music. This photo from 1966 was taken shortly before the band broke up, bringing their careers to an early end, but not before they had a huge part in bringing big, voluminous hair into style.