These Photos Show the Divide Between the Rich and Poor

Obsev
These Photos Show the Divide Between the Rich and Poor October 26, 2020 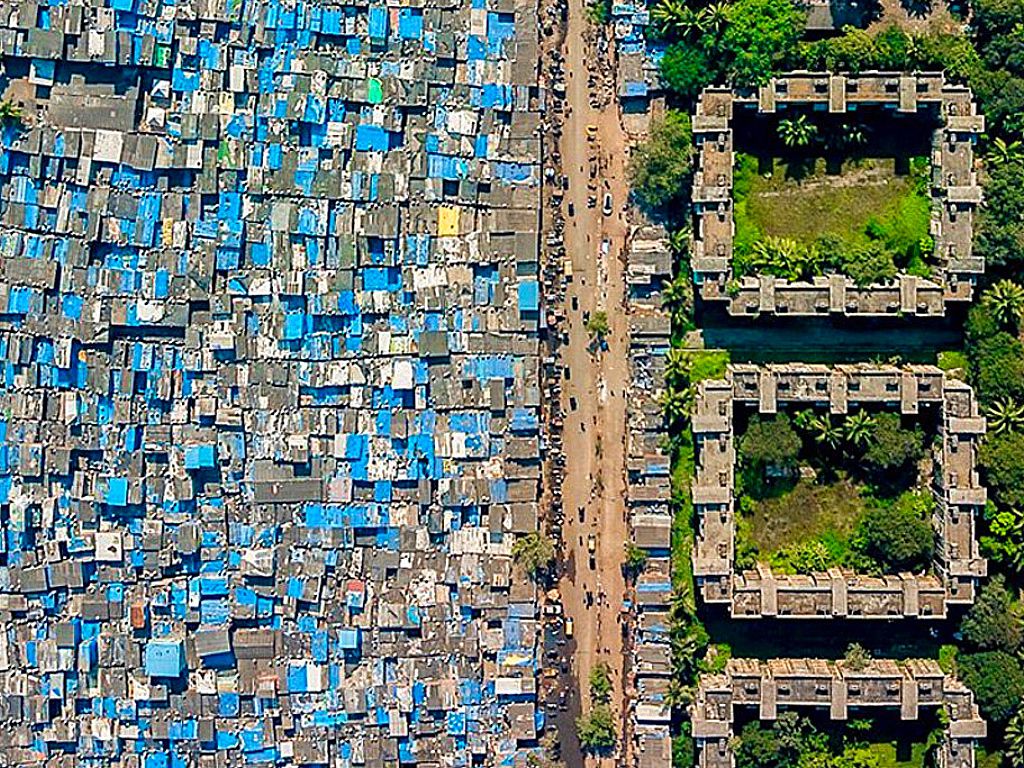 These aerial images show just how divided some parts of the world are. As part of a project titled “Unequal Scenes” by Johnny Miller, images depicting the narrow divide between rich and poor are used to argue that inequality still exists. It’s incredible to see how prevalent inequality is from another perspective, one that isn’t clouded by comfort.

Wildly enough, Johnny Miller isn’t the first one who thought to illustrate the discrepancies of inequality. It’s about time the rest of us enlighten ourselves to an extremely relevant topic.

India is the seventh largest country, but it is the second most populated country in the world. With all of those people, there’s bound to be some kind of inequality. The income inequality gap has only widened in the past year. Reports have said that 1% of the population have 58% of the wealth. Since the rise of urbanization, slums have made a permanent appearance.

The Dharavi is one of the most populated areas in the world. Initially created as a place for factory workers to live while India was under British rule, it turned into a slum for rural workers. On the other side is where the affluent citizens of India reside, those who work in the National Stock Exchange and other financially stabling careers.

After moving to South Africa, Johnny Miller wanted to showcase the blatant inequality he saw. On a simple trip from the airport, he drove through miles and miles of huts before reaching the more affluent suburban neighborhoods. Although he lived in the affluent suburbia himself, he couldn’t quite grasp how drastic the transition between rich and poor was.

Despite its name, Sweet Home is a slum in Cape Town, South Africa that was once a dumping site for construction companies. The development alongside it was intentionally built with fund-money in order to provide affordable housing for the people of Cape Town. But affordable seems to be a relative term.

The Lakes is an affluent area in Cape Town, South Africa that’s surrounded by an electrified fence surrounded by South Africa’s wetlands. The one thing that makes this gated community slightly different from others in South Africa is the fact that the community of Masiphumelele is extremely close. 'Masi' is home to 40,000 people who mostly live in tin shacks and suffer from unemployment.

Although more notable, it still remains a marker for drastic inequality. The Papwa Sewgolum golf course was named after a golfer of Indian-descent who lived during the apartheid era of South Africa. He was treated unfairly even after having won the tournament. Today, the golf course sits in line with a clump of slums.

Makause is a slum in Johannesburg that rests beside the wealthy suburb of Primrose. Makause is a settlement that houses roughly 30,000 people. Despite the overwhelming amount of people who live in this settlement, there aren’t very many resources available. As of 2011, there are only 2 taps for people to obtain water from.

One of the many slums located in the suburbs of Johannesburg, Kya Sands sits alongside a wealthy suburb known as Bluobosrand. It’s a slum filled with tin shacks surrounded by polluted waterways. Although the city of Johannesburg has tried to upgrade this location, nothing has happened yet. It might take a while before anything does happen, leaving Kya Sands and Bluobosrand unchanged.

Nomzamo is a settlement in South Africa that’s a few miles outside of Cape Town. It was originally created as a way to house single male workers during the apartheid years in South Africa. They served as hostels before the official housing structures were built. Though this area is one suburb, there are various types of houses—including government funded housing and shack dwelling. A fence separates the wealthier houses from these shack dwellings, where houses still exist in this “middle space.”

Dar es Salaam is Africa’s fastest growing city. It wasn’t always this way. Dar es Salaam was once the slowest growing city in Africa but since people began moving to Dar, city areas sprang up all over the surrounding areas. While Masaki retains its wealth, the poorer suburb of Msasani sits right across the street.

Roughly four men have a monopoly over the wealth in Mexico, making it dramatically unequal. It’s home to the world’s second largest slum as well as plenty of others scattered around the country. Inequalities in Mexico are easy to ignore when you aren’t confronted with them every day. Ciudad Nezahualcoyotl is the second largest slum in the world and it resides in Mexico. Although the slums paint the streets a shade of grey and bleakness, there are streaks of color that represent the market places, as well as hope in these areas.

Mexico is one of the most unequal countries that exist. Sante Fe is a slum that was once a garbage dump. In fact, people worked as garbage pickers in order to generate wealth for themselves. The government even intended to relocate the people living in the slums in order to create an upscale shopping district, but they received heavy resistance. Hence, this narrow divide between rich and poor.

A newly constructed housing structure in the Ixtapaluca development in Mexico City, Mexico sits next to low-income housing in the Alfredo del Mazo area. The fact that such affluent housing was put up directly next to low-income housing displays how ignorant the four people who control the wealth in Mexico truly are of the inequality that exists there.

In Mexico, the slums of La Malinche sit right next to a private school that offers incredibly affluent amenities. This is a situation where a barrio with a misshapen soccer field meets an affluent private school with both tennis and soccer fields. While both areas are beautiful, the direct juxtaposition of the wealthy and the impoverished is shocking.

Kenya is another country in America that has a record-breaking rate of income inequality. There have been studies that show that Kenya’s wealthiest 0.1% holds more wealth than the remaining 99.9%. The gap between the wealthy and the poor is growing in Kenya. Four out of ten Kenyans live in poverty, and most of those people make up the slums in Kenya.

Inequality and poverty in countries like Kenya is sometimes overwhelming. There’s no way to truly measure it, but photographs definitely help. In Nairobi, Kenya, a golf course sits directly next to the Kibera slum. As an area made up of hills, sewage drains are filled with debris and rubbage. All of the houses are made of mud, sticks and tin. Wealthy communities near the Kibera slum are gated. In Nairobi, slums are constrained by both infrastructure and the environment.

There’s always a lot of attention on other countries when it comes to income disparities. The United States has reached its peak of income inequality—breaking previously set records. Income inequality has reached its widest income gap in the last 50 years. Slums are in the form of tent cities and there’s an ever-present number of homeless people in cities around the country.

Baltimore, Maryland experience various forms of inequality. One of the most prominent forms is the racial inequality that lingers throughout the state that income inequality, consequently, follows. Abandoned buildings mirror wealthy housing on streets throughout the city, making the division crystal clear.

Los Angeles is one of the most divided cities in the country when it comes to income inequality. Most of the locals, roughly 18%, that live in Los Angeles fall below the poverty line. There’s a whole lot of wealth in California, but not a lot of people get to experience it.

The Divide in California

California has become a state with a very wide, very real income gap. There are streets filled with homeless people living in tents and sleeping bags. As the largest state in the country, California is definitely no stranger to inequality.

Although Seattle, Washington isn’t one of the worst cities when it comes to income inequality, it has definitely hit its own record. In 2017, it became the 18th state out of 50 with the highest income inequality. The only reason this is such a huge deal is because a year before they were ranked 31st.

Tent cities have been popping up in Seattle over the last decade. There has always been a homeless population, like in most metropolitan areas, but tent cities in Washington have made a presence. They don’t always hide under freeways or in densely wooded areas. There are plenty of uninhabited spaces in Seattle that are unoccupied due to affluent neighborhoods springing up. But tent cities have recently been filling in these spaces.

There are 208 million people living in Brazil. As the largest country in both Latin America and South America, income inequality is extremely prominent. In 2018, Brazil hit its highest level of inequality since 2012. While places like South Africa and India are home to some of the widest income gaps in the world, Brazil is no stranger to wealth gaps.

In Sao Paulo, Brazil, the affluent district of Morumbi sits beside the Paradise City Shantytown. When you consider the resort-like aesthetic of Morumbi, it’s shocking to see the income disparities between the two residences. Paradise City Shantytown is considered a slum, made up of tin shacks and cramped spaces, compared to Morumbi’s multi-tiered condominium full of tennis courts and pools.