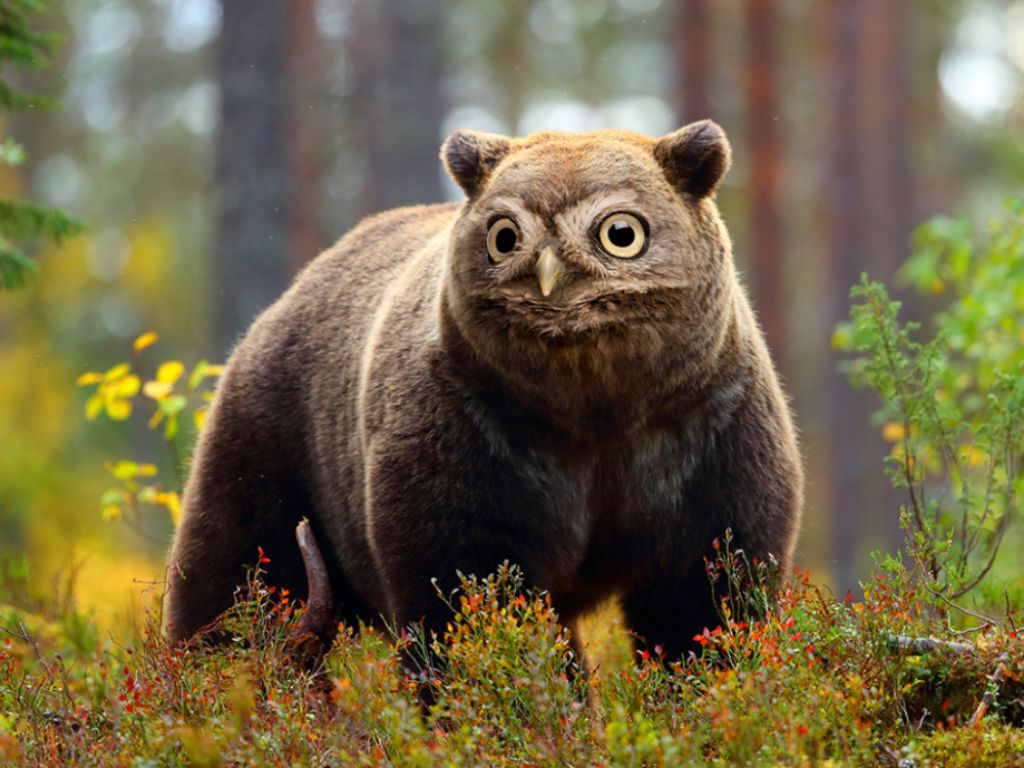 Arne Olav Gurvin Fredriksen has a strange hobby. He uses his Photoshop skills to morph two animals together and create an entirely new idea of an animal. Over years he has honed his skill so well that most of his creations look entirely real!

But, don't let your eyes deceive you because these are totally digital creations that don't exist in the real world. Even though they look completely realistic, you don't have to be afraid of any bear/owl hybrids wrecking havoc on your next camping trip.

Seals have a nasty bite, but this beal will only steal your heart! When Fredriksen came up with this idea, he must not have thought about how hard it would be for this animal to spend time between the land and sea!

This cuddly little fella is a mixture of a bird and a dog. If dogs chase birds, this bog is going to have some issues! Wonder what treats you give to a bog? Worms and kibble should do the trick because the early bog always gets the treat.

When you put together a bear and an owl you get the wise and menacing bowl! This one will peck your eyes out for a picnic basket. But, with the wisdom of an owl and the strength of a bear, you might end up having some great conversations over a tootsie roll pop.

This little burb looks like it was made from some radioactive peeps. Just imagine this little guy flying at your face to try and steal your carrots! This may actually be a genius new Easter mascot by how fluffy and cute it is.

This kitten tastes like chicken, so make sure its feed is poultry free! The pecking order in his pen would be hard to figure out because cats are always so aloof. He could dominate his flock with just a stern stare.

Is this cird cute? Ugly? Funny? You decide. This animal hybrid would definitely have some inner conflict, like Tweety Bird and Sylvester rolled into one majorly confused animal.

At chicken size, this Chorse would be a sweet, but still strange, animal. But if it were the size of a normal fully-grown horse it would be an absolutely terrifying monster of Godzilla proportions!

What a lovely... dog? This creation is subtly nightmarish, yet cute! But the puppy Dogowl would really steal some hearts at a dog show. It might also be the perfect animal for wizarding school hopefuls to befriend.

Which treat would the Dorse like best? Apples or bread crumbs? If you have either one on you, that'll probably be just fine. Surely, its deep, bass quack will carry through miles of grassland, terrifying anyone who lives close by.

Truly the stuff of nightmares, the Elephuck is terrifying not only because its beak would easily crush any creature on earth, but because just imagining what kind of sound it would make is enough to make you want to run for cover.

Cats would be a lot more cuddly if they couldn't make two story leaps like it was nothing, so combining them with a penguin is a great idea. But, anyone with a cat knows that they can't stand the cold for long, so this might be a bad idea.

Imagine a flock of these diving out of the sky just to smell your butt. And a nest of Figgles in your backyard would probably wake you up every morning to their happy barks, which might get old very quickly.

They'll leap over hills and valleys just to slam into a glass window. Maybe their long legs would fold neatly under their wings when they take flight, or perhaps they would start spinning like helicopter blades.

This fantasy animal would be the undisputed king of the hamster wheel! Its ferocious front teeth nibbling on a giant carrot or burrowing in some cardboard pieces would be a pleasing sight. I'm pleading with you science, make one of these for me!

Not so cute, but probably great at underwater racing, the Horseal spooks easily, cannot hear very well and its neck is way too thick. I definitely fear riding this creature, it's really the stuff of nightmares.

We're not sure if this hybrid is the runt of the litter, but he's high up in the pecking order! He's super friendly and can store 10 pounds of fish in his little beak.

It's terrifying just to think of what this one would do if it got bored. The dexterity of a monkey and the morals of a feline add up to a dangerous and unsavory character as far as a pet, but in the wild this dude would rule.

No. No. No! From the island of Dr Moreau comes this good looking little chap. Waddling towards you, you'd think... cute! Then the carnage begins. His flippers slapping you and that mouth eating you is the very definition of adding insult to injury.

Oh wrinkled pug-horse, you are so magical. I'd brush your hair and feed you bacon treats and we'd explore the world together. We could see the wonders of the world, pee on them, then trot ten feet to the next wonder... and pee on that one, and the next one... and so on....

Quoth the raven, more bananas please? The thoughtful-faced Ravenzee is here! You never again have to wonder what it may look like to genetically cross a raven and a chimp because here it is... you can rest now.

The miracle of modern science will one day bring us tiny flying dogs, but until then we have to dream. I can imagine four or five of these licking my face and being very happy about that.

Lost dogs could cover more ground if they could look for their owners from the sky. My dog got lost in Hollywood once and it took him 2 days to find a ride home. If he had wings, he would have been home in half that time.

It's Shorse week! You will be amazed by the amount of killing this animal could do. Trotting gracefully through the forest and biting small animals in half, gnawing the leg off an antelope and neighing playfully as it terrifies a goat.

Aerodynamics is a funny thing. Flight takes a certain amount of good design and the fact of the matter is, that tongue is gonna drag. This pug is not going to be the world's best flyer, but the effort would be hilarious.

This is the ultimate in cute. Do not pass go, do not collect $100 dollars... this squix has done it. You win squix! I bow down to you and your ultimate cuteness, may we all rest now, assured of this one fact.