Surreal Animal Illusions That Are So Unique, They’ll Blow Your Mind 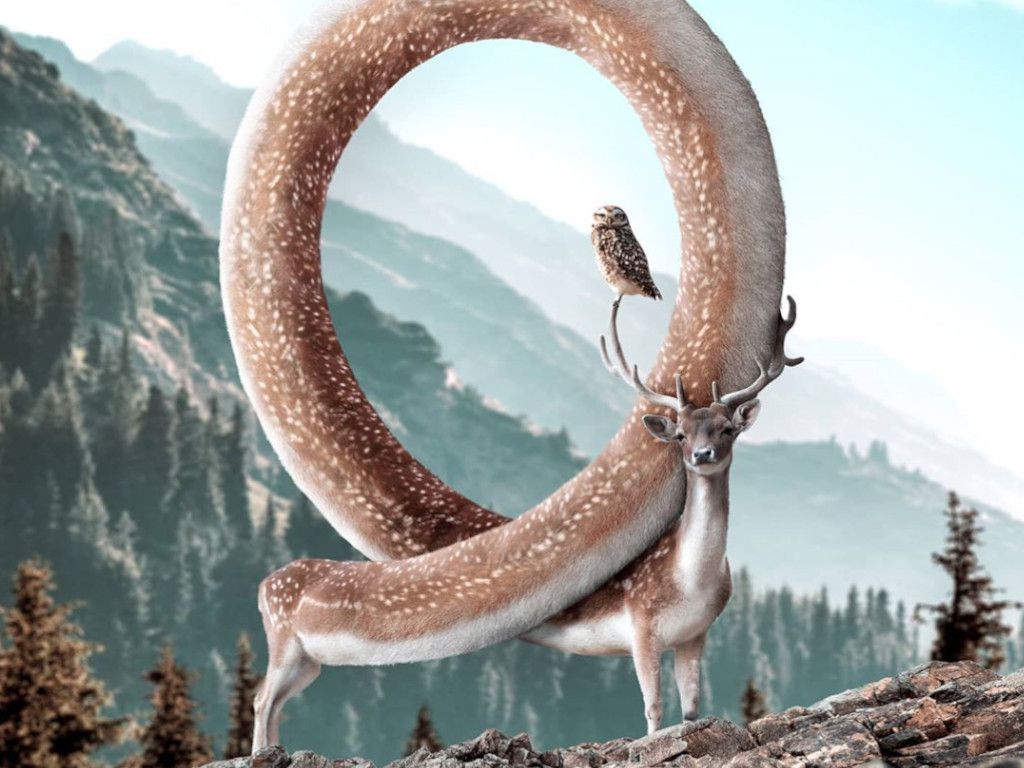 Julien Tabet was sick and tired of his boring surroundings so he decided to spice things up with his creativity and a little help from Photoshop.

He manipulated images of animals so he could show us how these creatures really behave when everyone’s backs are turned. Don't forget to check out his Instagram @julien.tabet for a wild time!

The Deer and His Antler Harp

Talk about nature’s wind chime. You can almost hear the music. This deer’s antlers make up a harp that a squirrel is eager to play just as soon as the bird finishes weaving the strings. It’s so adorable. But can they play “The Hills Are Alive?”

This Bird Is So Fogged Up

The boat appears to be trying to escape the fury of this bird made entirely of fog. But from the looks of it, the boat is about to get taken over. It is rare to find art that is both beautiful and a bit terrifying at the same time.

Man! Forget Noah! That polar bear and those penguins don’t need any help. They’ve got this enormous swan made of ice that is ferrying them towards the promise land. If Disney ever made a theme park in the arctic, they should find inspiration in Tabet's illustrations.

Even Squirrels Need a Toilet Break

Squirrels might live in the wild but it doesn’t mean that they can’t be civilized. Just ask this little guy who’s busy reading a gossip magazine while doing his business. Bonus: check out the cute toilet paper holder waiting for him for when he’s done.

Kitty’s Under the Water Blanket

Life’s a total beach for this kitty because he’s hiding between the sandy shores and the water. No wonder its owner has no idea where it’s hiding! Maybe this is where they got the idea for a catfish or maybe this is how kitty hunts for fish in the ocean.

Some say that this might be the owl’s crown, because it’s such a wise creature that it should rule the animal kingdom. But it’s obvious that Tabet intended for this to be a pineapple owl. There’s even a tiny owl safely tucked on top of the leafy crown, and it’s seriously too adorable for words.

This Rhino’s Got a Secret Garden

The horn on this rhino is like a key and the bulb at the end allows people to see inside the secret garden that’s nestled safely inside his body. This work of art has some major Garden of Eden vibes to it. It can also be interpreted as the animal having a hard shell with a soft heart, so it's open for interpretation.

This Cheetah’s Spots Are Taking Off

Ah, yes! Meet the rare cheetah-crow hybrid. They’re apparently a joint species. When they’re out hunting, they like to split up. The crow, which takes on the form of the cheetah’s spots, likes to shapeshift into a winged bird and fly off to scout ahead. So creative!

This Tiger’s Stripes are Unraveling

That bird might be tiny, but it sure is fearless. The poor tiger below doesn’t seem to mind that it’s unraveling its stripes. So, whoever said that a tiger can’t change its stripes has clearly never encountered this situation before.

This peacock looks like a fairytale character because instead of regular feather plumes, it’s got dandelion seeds. But this creature should avoid anyone who has allergies. Otherwise, one sneeze and it will find itself completely exposed in the wilderness.

This Gazelle is the Commander-in-Chief

Lions might be the kings of the forest, but this gazelle is clearly the chief of its tribe. Just look at the tribal paint on its cheeks and the Native American headdress on its horns. This is one magnificent creature you want to hail your allegiance to.

You might have heard of penguins, but have you ever heard of aquaguins? They’re basically two penguins who have an ocean for a body. And if you look at the artistic details, you’ll see that they contain a sunken ship, a humpback whale, fish, and a boater sailing on the surface.

Dog Training is for the Birds

Don’t bother hiring a human to take care of your dog-walking requirement because no one does it better than a bunch of birds. In this digital interpretation, three birds put a dog on a leash and take it out on a much-needed jog.

This camel is standing around in the Sahara oblivious to the fact that it has an hourglass made of fur embedded on its back. There’s so much detail in this artwork, like the sand running down the camel’s back that’s creating a small hump.

This Zebra’s Got Hidden Wings

You probably thought that a zebra’s black and white stripes were Mother Nature’s way of accessorizing her animals, but it turns out that they’re actually wings... at least according to this lovely digital art creation. It looks like this zebra is just about ready to take off and go soaring towards the sky.

This Monkey’s Under the Snake’s Protection

Most people are terrified of snakes and with good reason. But this snake has appointed itself the protector of this monkey and its two babies who are nestled safely in its bosom while the snake keeps an eye out for a potential threat.

Elephant Trunk Turns Into a Tree

Everyone knows that elephants have trunks, but Tabet took the meaning of the word quite literally and give this elephant a snake-like trunk that turns into a tree. The elephant is using the leafy tree to throw some shade over its back to protect itself from the sun.

This Butterfly is Completely Booked

Don’t bother making flight reservations with this butterfly. It’s booked! There’s something about this digital art that’s eerily reminiscent of the intro to “Reading Rainbow.” Now we’ve all heard of bookworms, but this is what they must look like after they break out of the cocoon and turn into butterflies.

The Bear and the Squirrel Are Drumming

This bear had a big drum embedded on his back. So, one day, a squirrel approached him and suggested they start nature’s band together. And now they won’t stop drumming all over the forest. This is so adorable and the bewildered expression on the bear is golden.

This Lion King’s Got Wings

Have you ever seen a lion with wings? Doesn’t this look majestic? It’s like something one would expect to see in “The Chronicles of Narnia.” In fact, this would probably make a great movie idea. It’s so amazing, it makes you want to roar!

This Gator’s Got Some Serious Zipper Lips

Tabet turned this alligator’s lips into a pair of open zippers, which is pretty cool. But you probably wouldn’t want to get close enough to it to try and zip its lips. Otherwise, you might loose and arm, a leg, or worse.

This Insect’s Got the Halloween Spirit

Tabet really outdid himself when he added the Jack o’ Lantern on this insect’s back. It also has smoke coming out of Jack’s mouth which makes it extra creepy and Halloween-ish. Who knew something so small could be so scary?

Birdie’s Tucking the Wolf in for Winter

It looks like winter’s coming and the bird is pulling a warm blanket over this white wolf. Then again, the bird could be peeling away the brown fur so that the wolf can look more stylish in the snow with its white fur coat. Either way, it looks spectacular!

The Rider’s Gotten Under His Horse’s Skin

We’re sure humans get under horse’s skin all the time, but this one shows a literal interpretation of a Native American who is riding on the horse’s back while hiding under its skin. It’s cool but also really creepy, too.

A Storm in Sheep’s Clothing

This sheep is looking a little under the weather, don’t you think? Thanks to Tabet’s creativity, the creature’s fur looks like a streak of white clouds with lightning discharging all around it. It’s truly an electrifyingly stormy interpretation.