Absolute Insanity: These Are the World’s Most Terrifying Bridges

Greg Smith
Absolute Insanity: These Are the World’s Most Terrifying Bridges May 15, 2019Leave a comment 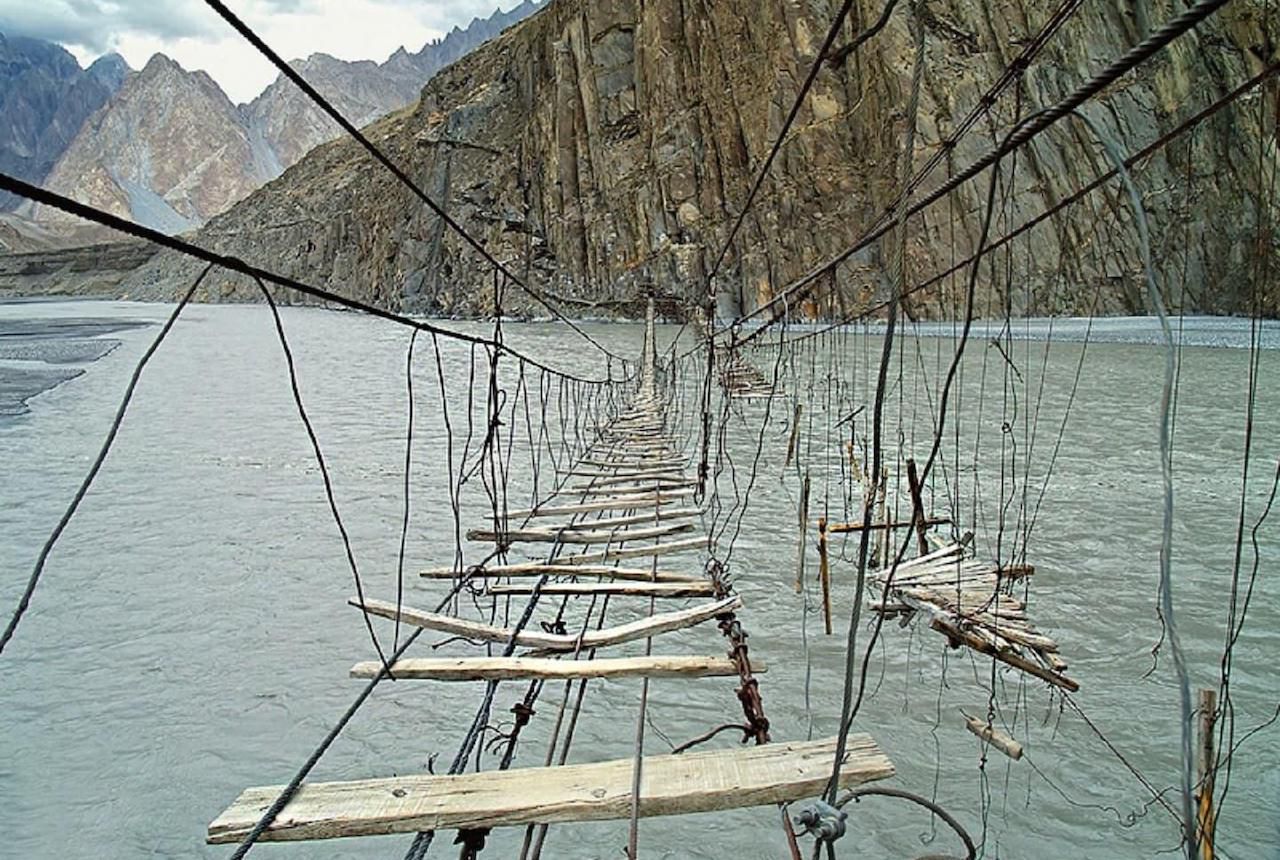 Remember in cartoons when the hero had to cross a rickety old rope bridge that looked like it was about to collapse? There are real bridges out there exactly like that! Check out those and other why-do-these-even-exist terrifying bridges around the world...

The U Bein Bridge

Located in Myanmar, the U Bein Bridge is our world's oldest teakwood bridge. It was originally built in 1850 and continues to be a popular tourist destination to this day despite the fact that many of its 1,086 wooden pillars are deteriorating.

Here's how to get to the Trift Bridge. Step one: Go to Bern, Switzerland. Step two: Take a cable car. Step three: Take a gondola. Step four: Hike the Swiss Alps. Step five: Enjoy the Trift Bridge, a narrow, curved suspension bridge with a vertiginous view that'll turn your bowels to water.

In Norway, the Storseisundet Bridge connects the island of Averoya to the mainland. As you make its devilish curve, you pass through an archipelago. And while you may find its journey frightening, it was nothing compared to the workers who built it. They had to deal with 12 hurricanes.

The Sidu River Bridge was built in China in 2009, at the cost of $100 million. So if you're ever wondering how much "a simultaneously breathtaking and harrowing view" costs to put into the world, you now have your answer. It costs $100 million.

Here's the nice thing about normal bridges: You've got normal building material visually protecting you from the world below you. Here's the horrible thing about glass bridges: You don't. Instead, with structures like the Brave Men's Bridge in China, you've got see-through glass. So are you brave enough to cross this 984-foot bridge across two cliffsides while looking down the entire time?

Want to have an existential crisis in the Florida Keys? Go check out the Seven Mile Bridge, a feat of Floridian engineering that connects two keys over lots and lots of ocean. Whether you're on the bridge for cars or take the brave walk all the way across, you will have plenty of opportunity to look at nothing but water and ponder your place in the world. Have fun.

The highest bridge in the United States resides in Canon City, Colorado. The Royal Gorge Bridge relies on 1,292 wooden planks to maintain its structural integrity, and large cars are not permitted to cross. In 2013, a wildfire raged across the area. Thankfully, the bridge remained mostly intact. After brief renovation, it reopened in 2014 to continue terrifying travelers.

You can find modern bridges in Peru. But the ancient Incans used nothing but ropes to traverse certain distances. So, every year, modern Peruvians renew and renovate Queshuachaca for cultural posterity and for any courageous would-be walkers.

Plank Road in the Sky

Mount Hua is located in China. It's widely accepted as having one of the most dangerous trails to traverse. To complete the trail, you have to cross the "Plank Road In The Sky," a very, very small and narrow wooden plank affixed to the side of the mountain.

A word of warning: Do not under any circumstances search for YouTube videos of the Kuandinsky Bridge in Russia. They contain footage of people driving pickup trucks across an old, obviously dilapitated and very rickety wooden bridge. Those videos are more terrifying than any dang Mission: Impossible stunt. And they might give you a bad idea.

The Ojuela Bridge was built in Mexico in 1898, as a way to get into a goldmine with more convenience. Now, only pedestrians may cross the wooden planks of the simple suspension bridge, as it was converted into a historical attraction in 1991.

If you hear of something called a "monkey bridge," you probably think to yourself, "That's just for monkeys," right? And yet, in Vietnam, many of these bare-bones bridges exist, with a path barely wide enough for two human feet to stand next to each other. Some modern thrillsters even have monkey-bridge-crossing contests. Some of them even on bikes.

A 1,125 feet, the Millau Viaduct in France is the tallest bridge in the world. It was built in 2004 and is widely regarded as a feat of engineering. In case anyone gets too worn out or spooked from traveling the structure, a "rest city" was built at the north end of the bridge in 2006.

Located in China, the Longjiang Bridge is one of the world's longest suspension bridges. It was completed in 2016, costing $292 million. The bridge connects certain Chinese cities straight to Myanmar. And for poor construction workers like the one in this photo, it also connects certain fear neurons straight to the heart.

Located in Malaysia, the Langkawai Sky Bridge features one heck of a curve in its 410-feet construction. Pedestrians can enjoy/fear the wide views offered atop its location of Gunung Mat Chinchang, a mountain on the island of Langkawai. And, right in the middle, they'll have to chart quite the precarious arc.

In the Upper Peninsula of Michigan lies a beautiful place. Mackinac Island, a tourist dream full of fudge, bicycles and quaint beauty. To get there, all you have to do is cross the Mackinac Bridge. A bridge known for swaying to and fro in the wind. A bridge that's been shut down in Michigan's frigid winters due to dangerous conditions. So we just have one question: Are fudge and bicycles worth it?

The Iya Valley of Japan is a traveler's dream. It has lush, green, natural views. It has serene hot springs and luxurious hotels. And it has utterly terrifying bridges secured with nothing but wood, rope and vines. These vine bridges are the only ways to visit some of the most beautiful areas in the valley, and they continue to attract adventurous tourists to this day.

It just doesn't look like there's a lot of bridge to this bridge, right? Indeed, the Hussaini Hanging Bridge in Pakistan is truly a selection of rotted-looking wooden planks hung in the air by some rope. And yet, tourists flock to the bridge with regularity, to say nothing of the Pakistani residents who walk the planks like they're nothing.

If two giant stone hands emerged from the ground to hold up whatever you were standing on, would you find that peaceful or terrifying? The Golden Bridge, built in Vietnam in 2018 by Vu Viet Anh, bridges those two disparate emotions with its dramatic stone sculptures.

No, your eyes aren't playing tricks on you. The Chesapeake Bay Bridge-Tunnel in Virginia dips underwater and becomes, as its name suggests, into a tunnel. Then, like a petrified phoenix, it reemerges into the world, a bridge reborn. Who needs roller coasters when we've got this thrill ride?

Speaking of roller coasters, the Eshima Ohashi Bridge in Japan takes a sharp, sudden turn up or down depending on which direction you're driving. While this is a rigid-frame bridge, which feels safer than an average suspension bridge, that ramp is just really something to get used to.

As of this writing, you can't cross the very scary Captain William Moore Bridge in Alaska, which is only anchored at one end out of earthquake safety concerns (because it's, you know, directly above a fault line). While it was built in 1976, it's currently deteriorated and has become unusable. Repairs are underway, expected to finish by the fall of 2019. See you at the grand opening?

Canopy walks, mini-bridges that help pedestrians traverse through forests, exist across the world, and they're all fairly terrifying. Here, we see one in Malaysia. Note its narrower-than-narrow walkways, taut ropes, and thin mesh nets. Just try not to bite your fingernails. Because you may need them for when you cross the canopy walk.

In Northern Island, you can cross some of the most beautiful rocks and small cliffs using the Carrick-a-Rede Rope Bridge. But it's really small. And really narrow. And it's  suspended primarily by ropes. And here's the insult added to injury: You have to pay to cross it. Capitalism: the scariest bridge of all.