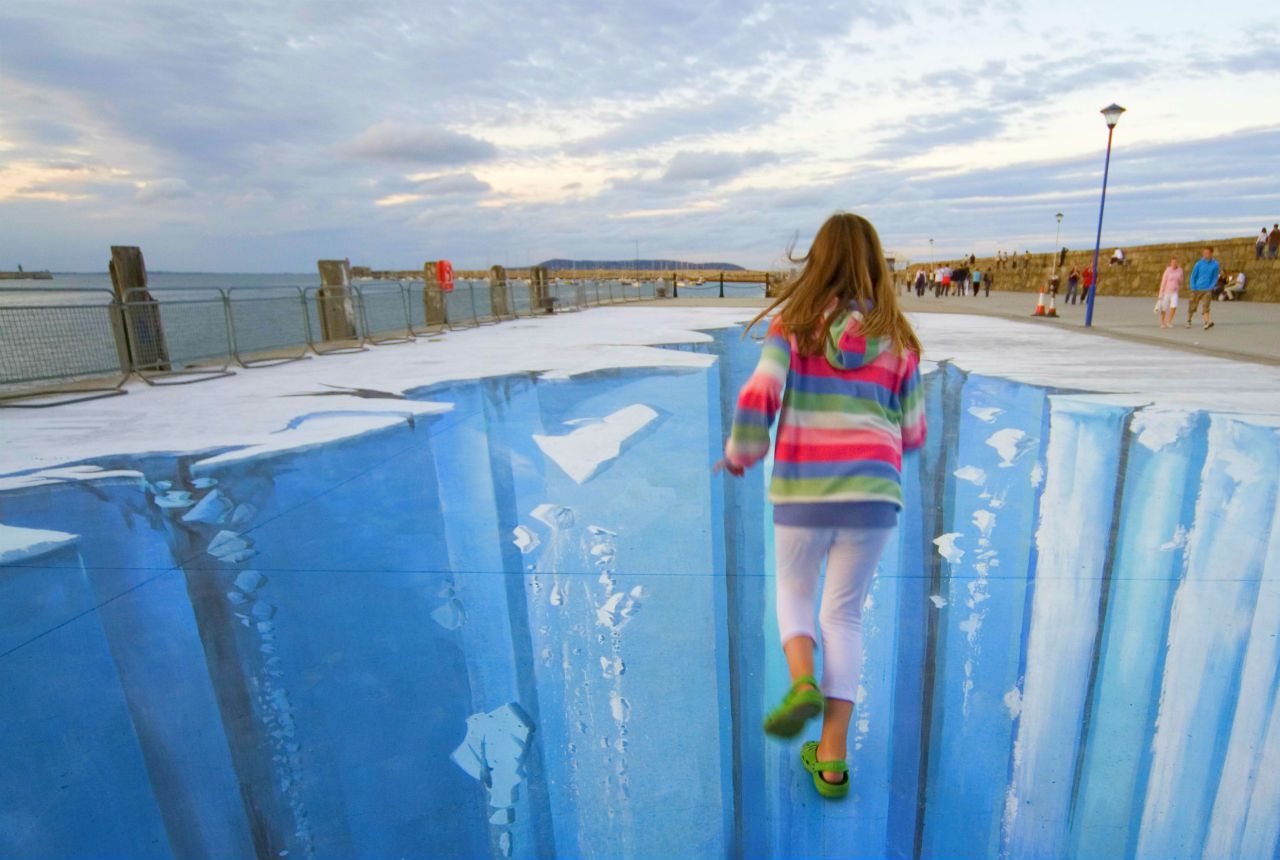 You're about to meet some of the masters of anamorphosis. That's a fancy word for the a picture that distorted to create a 3D illusion when the viewer looks at the picture from a certain angle. It's the secret sauce in those amazing 3D sidewalk paintings you may have seen. So let's take a closer look (from a specific vantage point)...

Street artist Edgar Mueller created this 3D street illusion titled "Use Your Eyes." It took him five days to paint it during a competition of street artists that took place in Geldern, Germany, in 2008. It really raises the stakes if you're playing "The Floor Is Lava."

Break Your Mother's Back

Here's another Mueller work. The saying goes, "Don't step on the crack or you'll break your mother's back." Superstition aside, is there a rhyme about what happened if you fall into a mysterious pit in the middle of an urban sidewalk? Probably have bigger things to worry about than your mom's spinal situation.

One of Mueller's best-known works is this 3D street painting titled "Crevasse." He painted it in on a pier in Dun Laoghaire, Ireland, for the "Festival of Culture" that ran in August 2008. The Goethe Institution Germany supported the project.

Here's a cool shot of what Mueller's "Crevasse" looked like while still in progress. It gives you a little bit of a sense of the forethought and planning that goes into creating a believable 3D street painting.

The best part about 3D street art is the chance for interactivity. Their existence in public space is inherently democratic and populist. And most of the artists like Mueller who create work like this encourage passersby to interact and have fun with the paintings.

Eduardo Rolero is a 3D street artist from Argentina whose whimsical paintings are more concerned with character than landscape alone. He describes his point of view as "incisive, mocking and cheeky."

Rolero left Rome in 1996 and moved to Spain, where he is still based today. After returning for a time to more traditional artistic formats, Rolero later went back to street art. He developed the techniques he uses to create the optical illusions in his work.

Out of the Frying Pan

Rolero uses his art to illustrate, in his words, "a condition of existence or a social situation." His goal is for his work to display "a narrative sense and not just a visual effect."

Julian Beever is a Belgium-based British street artist who specialized in pavement drawings, wall murals and realistic paintings. He's created pieces in urban environments all over the world.

Falling Into a Beever

Here, people pose around a Beever work made in a shopping center in Medellin, Colombia on Sept. 5, 2013. Beever created this piece entirely out of colored chalk.

This is Julian Beever himself posing with his own 3D picture of Santa in his grotto. Beever created this painting at The Atrium Shopping Centre in Camberley, England, on Dec. 20, 2011. The 3D illusion shows Santa deep in his workshop, supervising elves making Christmas presents.

Believe or not, there's no water in this photo of Stader's artwork in Cape Town, South Africa, which was taken on Nov. 21, 2010. Stader created this masterpiece to advertise the opening of a popular swimwear company's first dedicated concept store in Africa.

According to his website, Stader began street painting and pavement art during his art studies in the early 1980s. By 1985 he became one of the few master street painters, achieving the title "Master Madonnaro," a title awarded at the largest international street painting competition in Grazie di Curtatone in Italy.

Another one of Stader's fun masterpieces. It was the philosopher Kramer who said that if you are attacked by a shark, what you should do is "look up at God, thank him for all the summers that he's given you, and fade away. Congratulations, you just died a glorious summer death."

Manfred Stader isn't afraid to create commercial art that exists to advertise products and services like a coffeehouse chain or a brand of banana hammocks. What's this piece an advertisement for? It's for the idea that no matter how carefully you walk through life, yawning doom is always one misstep away, you could plummet into the abyss at any time.

American street artist Kurt Wenner is famous for combining traditional street painting with classical training, illusion and performance. Here, he adds the finishing touches to a 3D work of art in London's Waterloo Station on Oct. 17, 2007. A British telecommunications company commissioned this piece to launch a new advertising campaign.

Wenner has been perfecting his unique art since 1982 when he began sketching on the streets of Rome. In this 2007 piece, he drew a London Underground entrance populated with British literary characters. The drawing was done in Brussels, Belgium, to announce shorter commuting times on the Eurostar.

Take the Money and Run

In this July 24, 2008 photo, Drew Frankenfield, 10, of Philadelphia and a security guard pose for pictures with another Wenner piece in Waterloo Station. A U.K. price comparison website commissioned the piece to represent the GBP 16 million their customers saved up to that point that year.

In London, Wenner unveiled this 2010 creation inspired by The Big Lunch, a U.K. event that takes place annually on the first Sunday in June with the aim of getting as many people across the country to have lunch with their neighbors in an act of community, friendship and fun.

This piece of Wenner's is appropriately titled "Spiderman Saves the Day." The photo was taken in February 2011 at Universal Studios, Japan.