Obsev
An Ancient Salt Mine in Poland is Home to Chapels with Chandeliers Made of Salt September 17, 2020Leave a comment 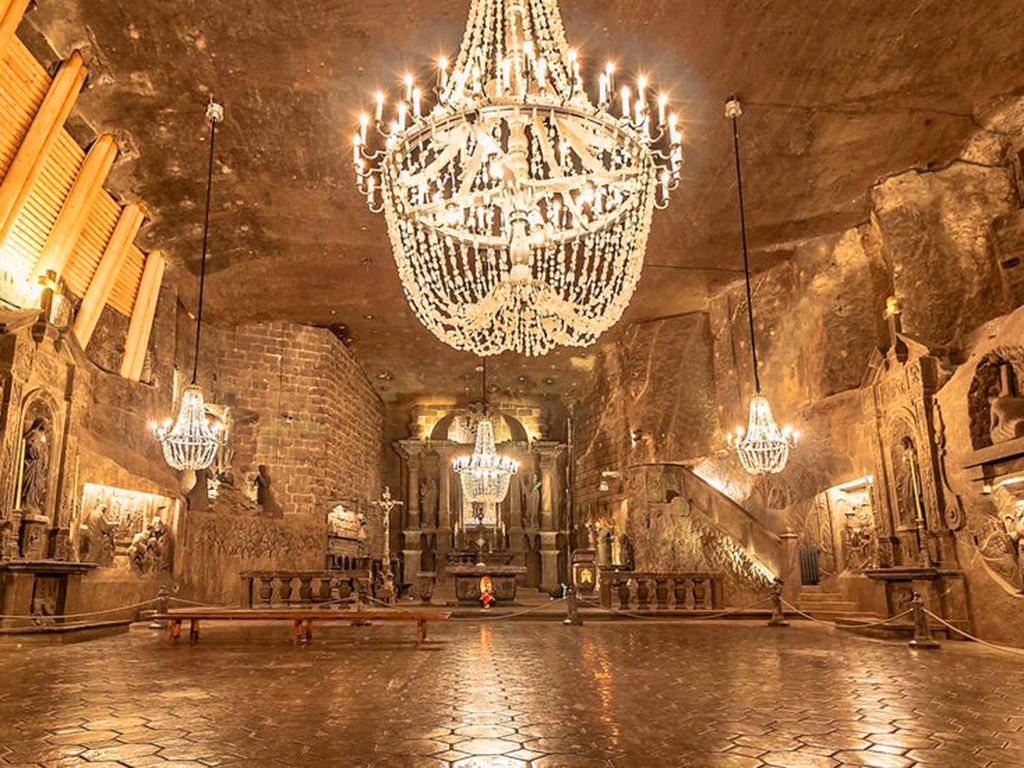 Salt is one of the most basic staples in the kitchen. We sprinkle some on our eggs and fries. We add some to our recipes. But you probably never imagined that it could be turned into a work of art.

Well, if you want to experience a salty wonderland, then come to the Wieliczka salt mine near Krakow, Poland, and bring your walking shoes. You’ll need them!

This Polish Building Isn’t What It Seems

About 10 miles outside of Krakow, Poland, is a building that appears to be normal. But the structure is a gateway to one of the country’s most astonishing historic sites. But you shouldn’t focus on what’s on the surface.

The Deeper Mystery Lies Below

Guests from far and wide come to this building year-round looking to explore the mystery from within. But they should be looking at what’s underneath their feet as the building holds a deeper mystery, unlike any other.

It’s an Entrance to Another World

Although the building itself is pretty basic, it serves as an entrance to the Wieliczka salt mine— a place that’s full of wonders both subtle and gross. But once you go in, you might not want to leave. What’s lurking underneath?

There’s a World Below

The salt mine reaches –1,072 feet below the surface, which is pretty deep. But that’s not the impressive part. In addition to underground lakes, this ethereal world also contains 2,000 chambers and chapels with huge chandeliers dangling from the ceilings. And that’s not all.

You Have to Visit St. Kinga’s Chapel

330 feet below the surface is one of the most spectacular rooms you’ll ever see. It’s located in St. Kinga’s chapel where the chandeliers dangle overhead like stars and the carvings pay tribute to an important saint.

The Chapel Pays Tribute to a Saint

The chapel is named after St. Kinga, a saint that’s revered in Lithuania and Poland and is known as the patron saint of miners. She is featured heavily in the chapel’s wall carvings, but you won’t believe what they’re made of.

The Grand Staircase Leads to a Salty Discovery

To get to the vast room, you’ll need to walk down a grand staircase where you’ll arrive at a large hall full of wall carvings and an altar to St. Kinga on the far end. This is just one of many masterpieces that are carved into a solid rock salt wall. Another carving features one of da Vinci’s works of art.

Among the various artworks carved into the wall is a version of Leonardo da Vinci’s “Last Supper.” And like the other carvings, it too is made of salt of various shades like green, gray and gold. But if you look above, you’ll find that it’s not the only thing around here that’s salty.

Even the Chandeliers are Made of Salt

The chandeliers hanging above might look like they’re made of glass, but the fragments held together by strings are actually made from salt crystals found at the Wieliczka salt mine. And the chandeliers are as magical as the mine’s origin story.

Meet a Salty Version of St. Kinga Herself

Among the various things you’ll see at the chapel is this scene carved from salt that depicts the legend of St. Kinga and how the salt mine came to be. She’s the one on the left with the crown being given a lump of rock salt, and the scene explains the secrets of the mine.

The Mine Appeared by Magic

According to the legend depicted in the salt-carved scene, St. Kinga asked for her wedding dowry in the form of salt and that’s how the mine at Wieliczka magically appeared. But why didn’t she ask for money instead?

Kinga Wanted Her Dowry in Salt

The legend, according to UNESCO, says that a Hungarian princess named Kinga was going to marry Duke Boleslaw of Poland. Since they were both very rich, money was the least of her problems. So, she asked her dad to make her dowry in salt. But that was no easy task.

Her Wish Required a Divine Miracle

It would have taken a salt mine to grant her wish. This was a task that proved impossible for a mortal man. So, her father dropped her engagement ring into a mine shaft and asked for a divine power to give his daughter what she wanted the most. But did it work?

Her Men Dug Up a Miracle in Her Estate

Per the legend, a miracle occurred once Kinga got married and moved to Poland. She was exploring her new estate and ordered her men to dig. And that’s when they found large deposits of salt. To tell her of their discovery, the men presented her a lump of rock salt. But the real surprise was hidden inside.

Her Ring Gave Poland a Salt Mine

Excitedly, Kinga broke open the rock salt and found the wedding ring that was dropped into the Hungarian mine. It seemed unbelievable, but somehow, her ring had brought a salt mine to Poland. But what did she do with this discovery?

The Salt Mine Brought Her Lots of Wealth

It’s said that the salt mine brought Kinga and her people insurmountable wealth and she was considered a kind and beloved ruler. Now whether you believe in the legend is up to you, but one thing is true. When you visit the mine, you’ll be offered two routes that lead to even more spectacular discoveries.

Choose the Miner’s Route and Learn Some History

Visitors can either choose the miner’s route, which provides a more technical history of mining. This includes a series of dioramas that show mining techniques like extracting salt from saltwater. But you can always opt for a more scenic route.

Pick the Tourist Route for a More Scenic Adventure

You can take a more scenic tourist route that includes caverns like the Stanislaw Staszic chamber, which is so large that in 2000, it hosted a world record attempt for underground ballooning. In fact, Balloonist Krzysztof Rekas was able to float 7 feet off the cavern floor. But to explore the scenic route, you’ll have to do a whole lot of walking.

There are More Than 800 Steps

The tourist route has over 800 steps that take you down four stories. That’s almost 450 feet underground, so prepare to burn a couple of calories on the way down. As you go in deeper, you’re going to notice a bit of a drop, but not in height.

There’s about two miles in total between the passageways, the staircases and the caverns along the tourist route. But you might want to bring a coat as the salt mine can get a bit cold. The temperature is said to drop to about 62 degrees. And whatever you do, don’t look down.

If you accidentally take a look down the stairwell, you’re going to very, very sorry, especially if you’re a bit squeamish about heights. By the time you’re done climbing down, you won’t want to climb back up. Fortunately, you won’t have to.

You’ll Find Salvation at the Bottom

Once you make it all the way down, you’ll be happy to know that you can take an elevator all the way back up. And be grateful that you do. Otherwise, you would have to climb back up the way 19th century miners used to.

19th Century Miners Had a Tough Time Getting Down

In the 19th century, the miners didn’t have a staircase to climb back up. In those days, the only way to get down to the pit face and back up to the surface was by rope. But once they got there, they did a ritual before they got to work.

They Prayed Before They Started Their Work

When the miners finally got down, they prayed at St. Anthony’s chapel, which is found right next to the descent, before getting to work. The chapel was carved way back in the 17th century, and much like St. Kinga’s chapel, it too is very salty. But there’s one area that tourists find very romantic.

The Saline Lakes Are a Romantic Hot Spot