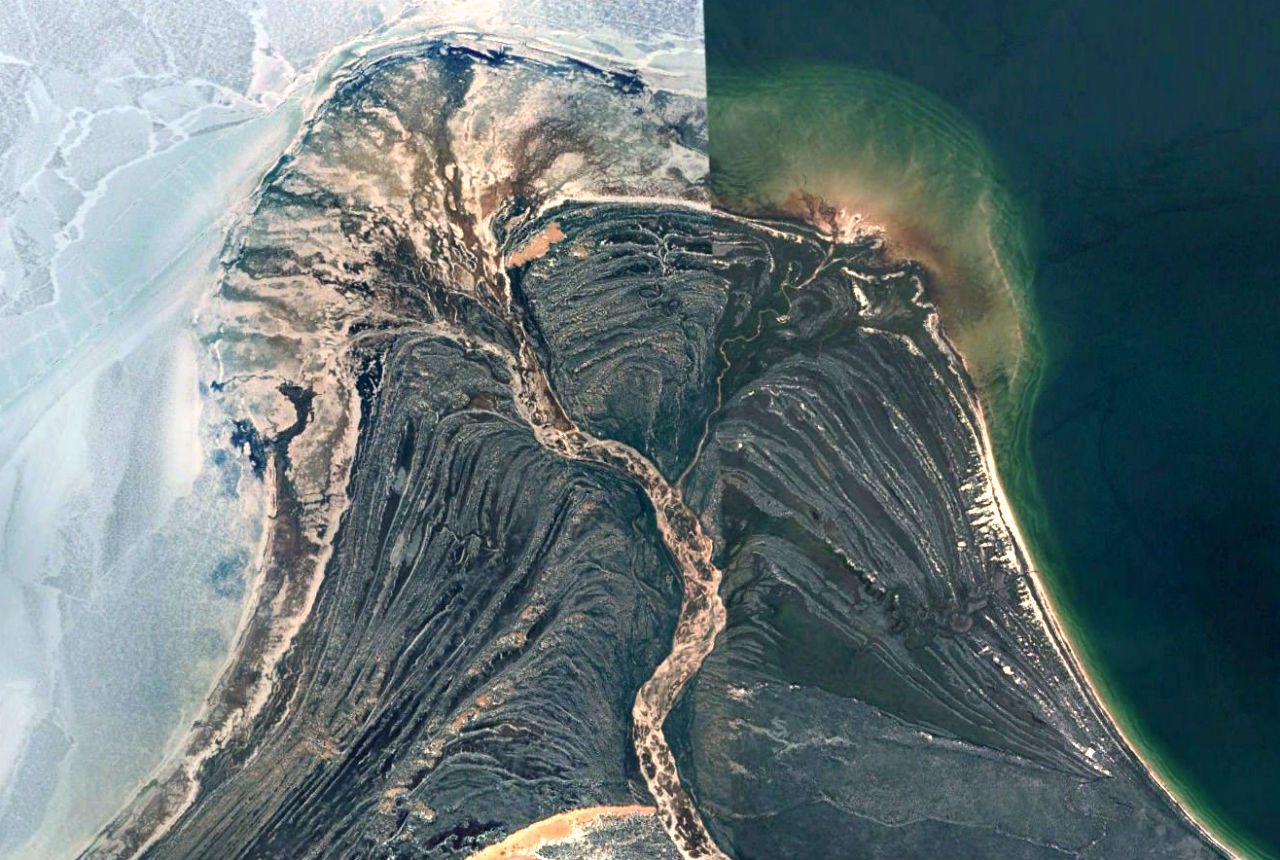 On Imgur, a geologist named William who goes by the username geologistsmakethebedrock likes to post interesting screenshots he finds using Google Earth. Given his day job, he's able to explain in fascinating detail what these near-abstract satellite photos are actually showing us. Dive into some of this geologist's coolest Google Earth finds...

If you think those mountain looks like they've sunken into the sand, you're not alone. "This is a weird optical illusion," William writes. "The shadowed, high relief, area looks like its lower than the surrounding desert. The ephemeral river systems wouldn't make sense if that were the case."

William says this is "a cool delta building out into Ayyakum Lake, Tibet. The river is unnamed on Google. It is fed by snowmelt from mountains to the south. You can see some isolated sand dunes NW of the river. There is a name for this type of dune, but I can't remember what it is. They happen when there is enough wind to migrate dunes, but not enough sand."

This is "an anticline somewhere in Iran with a series of alluvial fans on the south side," according to William. He adds, "I really like the blue color of the formation ringing the center of the anticline. I need to go there and get a sample. You can see the colors of the formations reflected in the fan."

"This is my favorite," William writes. "It's a marina near Milwaukee, Wisconsin (USA). The winter ice is in the process of breaking up. I don't know why, but this is very visually appealing to me."

"The colors here are awesome," William says about the irrigated fields in West Texas depicted here. "I'm guessing the crops were recently harvested or recently plowed under and we're seeing the soil color. In my experience, harvested corn or wheat fields aren't this orange/red. Any ideas? The white specks are oil pads connected by little roads. This land is certainly being utilized."

This is "a WWI gun battery/fortification around Verdun, France." Verdun was the site of the Battle of Verdun, the largest and longest battle not only of WWI but in human history. It lasted 303 days, almost the entire length of the year 1916, from Feb. 21 to Dec. 18. Between the French and German armies who fought the battle, there were 714,231 casualties.

The Japanese attack of Pearl Harbor on Dec. 7, 1941, bombed and sank the battleship USS Arizona. The wreckage of the ship still sits at the bottom of the harbor, and the USS Arizona Memorial, one of the most popular tourist spots in Hawaii, is built on top of it. You can see both in this wild Google Earth screenshot.

Here we have a shot of "preserved craters from the D-Day bombardment of German fortifications at Pointe du Hoc, Normandy." La Pointe du Hoc was the highest point between Utah Beach to the west and Omaha Beach to the east.

This is "a breakwater and lighthouse on one of the Great Lakes," William says, although he "can't remember where" exactly. The cool detail he points out about this shot: "Notice the circular pattern of waves reflecting off the structure."

At the mouth of Mobile Bay, Alabama, sits Fort Mogran. William describes it as "a beautiful star fort." He adds, "I’ve never been to this one, but it looks to be in very good shape. You can see the retrofitting of more modern gun emplacements."

"A beautifully symmetrical volcano on the Kamchatka Peninsula in Russia," William wrote. "Look at those weird red cinder cones on the flanks."

Here's another cool volcano that you can find, according to William, "in the Great Rift Valley with a micro climate and a very asymmetrical crater, much like Mt. St. Helens."

"The above picture is the delta of the [Mississippi River]," William writes. "It is a classic example of a river dominated delta, often referred to as a birds foot delta. The yellow like is often marked on road maps as the Louisiana (LA) shoreline. It was never totally correct because deciding where the marsh/swamp ended and open water began was never easy. It does illustrate the "skeletal" nature of our current coastline."

Here's another cool star fort William found on Google Earth. "This is Fort Jackson," he writes, "a post War of 1812 fort built to defend the river approach to New Orleans. It saw a lot of action during the civil war, and ultimately fell. Unfortunately it has been closed to the public for several years."

William describes this as "the coolest delta I've ever seen." He adds, "It's formed by the William River, which flows through Athabasca Sand Dunes Provincial Park and into Lake Athabasca, Saskatchewan CA. ... The left side of the image seems to be while the lake is frozen but the river is not. The bands that sort of parallel the shoreline look like cheniers."

This is another cool shot from the Mississippi River Valley. "Notice how the farm land is in thin strips radiating out from the river," William points out. "This is a throwback to colonial times when people needed so river front to transport their crops. The river was the only mode of transport."

"This is the southern edge of the Florida Everglades," says William. "Cool colors and interesting water flow patterns. This is basically a flat limestone shelf where water comes up from the subsurface, flows in sheets through the glades, and then starts to channelize as it flows down to the ocean."

Here's another amazing Google Earth screenshot that looks like a meticulously painted abstract. But, nope, that's American farmland from the heartland, baby. Specifically, these are irrigated fields in Kansas, according to William.

William the geologist had to travel to Canada to get this shot. Travel there via Google Earth, that is. "This is a very cool random river surrounded by flood plain lakes," he write. "Look at all of those oxbow lakes."

Have you ever seen a fire with a bird's eye view? William explains this photo depicts "a sugarcane field burning in south Louisiana, USA. This is commonly done to remove all of the leftovers from harvesting. Sugarcane is a grass so there is a lot of organic material leftover."

And this unsightly formation? "Salt Glacier in the mountains of Iran," William says. "There are many salt deposits around the world. They usually form when a seaway gets isolated or slightly isolated from a larger ocean. Evaporation will eventually make the small sea oversaturated and salts can precipitate on the sea floor. Some of these deposits can be Kms thick. When the salt gets pressured, either by the weight of sediments above or from tectonics, the salt will flow like a liquid."

Cold enough for you? Here we have "multiple alpine glaciers flowing together" in southeast Alaska.