Camila Villafane
24 Hilarious Wedding Fails That Prove Anything Can Go Wrong on Your Special Day May 8, 2019Leave a comment 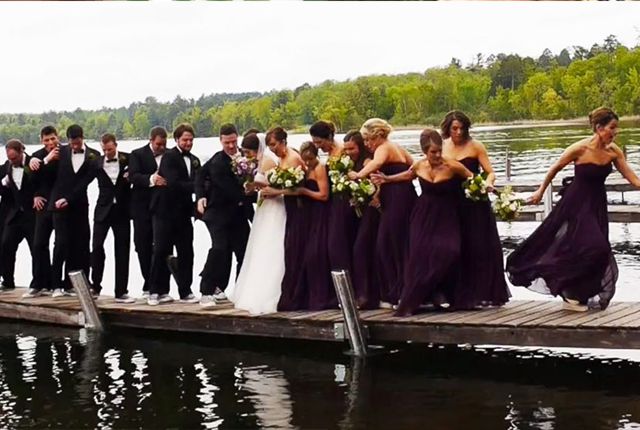 Couples spend months or even years and tens of thousands of dollars planning their weddings. They try to anticipate and plan for everything so the big day goes off without a hitch. But sometimes hitches happen anyway. Big, big hitches...

The photographer thought it’d be a great idea to have the entire bridal party stand on the dock by the lake. But their combined weight caused them to make a big splash when the dock collapsed beneath their feet. Shouldn't have had that second piece of cake.

Doggy Style at the Wedding

Talk about one of the most shocking wedding photo fails. That bride and groom will undoubtedly get their groove on later, but these dogs are already getting a head start.

We don’t know if these newlyweds are really into bondage fun, but when they put the initials of their last names together, they gave everyone a reason to gasp and look the other way.

Checking Under the Hood

Here’s why you never turn your back on a little boy at a wedding. The moment you do, he'll try to get a sneak peek under the bride’s dress just to see what all the fuss is about.

That pesky photographer keeps asking the bride and groom to take more pictures, but clearly all they want to do is to get to the hotel room so they can start their honeymoon and consummate their marriage. Well, at least the groom does.

Bride Does a Keg Stand

If the groom can have a stag party, then the bride can do a keg stand and get wasted on her wedding day. Hopefully, she did this after she said "I do," or she probably had a tough time walking down the aisle.

Dry-Hump in the Background

How can anyone focus on the stunning bride and groom when they’re getting photobombed by those two in the background? Maybe they’re mad they weren’t picked to be the maid of honor and best man.

That bride in the background is off to a great start. You’re supposed to feel miserable with each year that goes by in the marriage, but that bride looks peeved already.

Talk about a chilly experience. This groom must have been so excited to marry his blushing bride that he forgot to put on his tux. Thankfully the bride had no objection.

A Cow Crashed the Wedding

She didn’t want the bride and groom to be the center of the universe, so she came dressed as a cow in order to steal their spotlight. And you thought your mother-in-law was a crazy cow.

These bridesmaids are ready to support their bestie on her big day. But wait. What’s going on? Ouch, that’s a wedgie. Give them a minute while they handle this problem in a delicate way.

Classy. The groom and best man are popping a squat in one corner while the bride and maid of honor are taking a bathroom break in a gender non-conforming way. Very modern.

It Was Her Way or Else

This bride puts the zilla in bridezilla. But she also puts the urder in murder, apparently. Most brides try to look all pretty dressed in white. But, unfortunately for her wedding guests, this bride decided that a splash of red would make a bolder fashion statement.

What Hairy Legs You Have

Traditionally, the groom tries to take the garter off his bride. This guy probably thought his bae forgot to shave that morning. Except he was touching some random dude’s leg. Either that, or this guy was marrying his sugar daddy. Who knows?

The Cake Came Crashing Down

This may be the worst thing that could happen to a bride and groom. But that’s what they get for trying to cut a slice of cake from the bottom section. The look of fear on the groom’s face is priceless.

Grandma Does Not Approve

A proposal at a sports game? That’s so romantic. Well, it would be if the granny sitting in the front wasn’t flipping the photographer off. Clearly, she doesn’t believe in romance.

Robbi’s husband probably thought it would be kind of funny to wear a pair of boxers that say "Robbi’s Husband." But, judging from her facial expression, we’d say she’s having second thoughts.

Judging from the shock and pain on her face, it seems like this bride probably wishes she had used a shorter train veil. Maybe that was her dad’s way of saying he didn’t approve of the marriage.

Walking around in a wedding dress sounds like a nightmare. You have to constantly pick up your dress so it doesn’t get wet or muddy. You also have to keep dogs from using it as a fire hydrant.

It looks like the bride didn’t enjoy the taste of that drink the bartender made for her. But we bet it tasted just as bad coming up as it did going down. And now she has a snap of that unforgettable moment.

So maybe that's not the infamous Bigfoot himself. If it had been, the couple could have made millions. Sadly, it’s just some topless dude in the wrong place at the wrong time.

A dude that looks an awful lot like Gollum from "The Lord of the Rings" photobombed this wedding photo because he was looking for his precious. But all he found was the bride’s ring.

They Ditched Their Dresses

This bride was so nervous that instead of imagining everyone without their clothes, her bridesmaids ditched their dresses. Now she’s having a tough time keeping the groom’s eyes focused on her.

This Wedding Was Total Bull

Rounding out this list of wedding photo fails is this hilarious pic. They wanted a country wedding, but they got way more than they bargained for when the bull and cow in the background honored the nuptials by conceiving a calf.