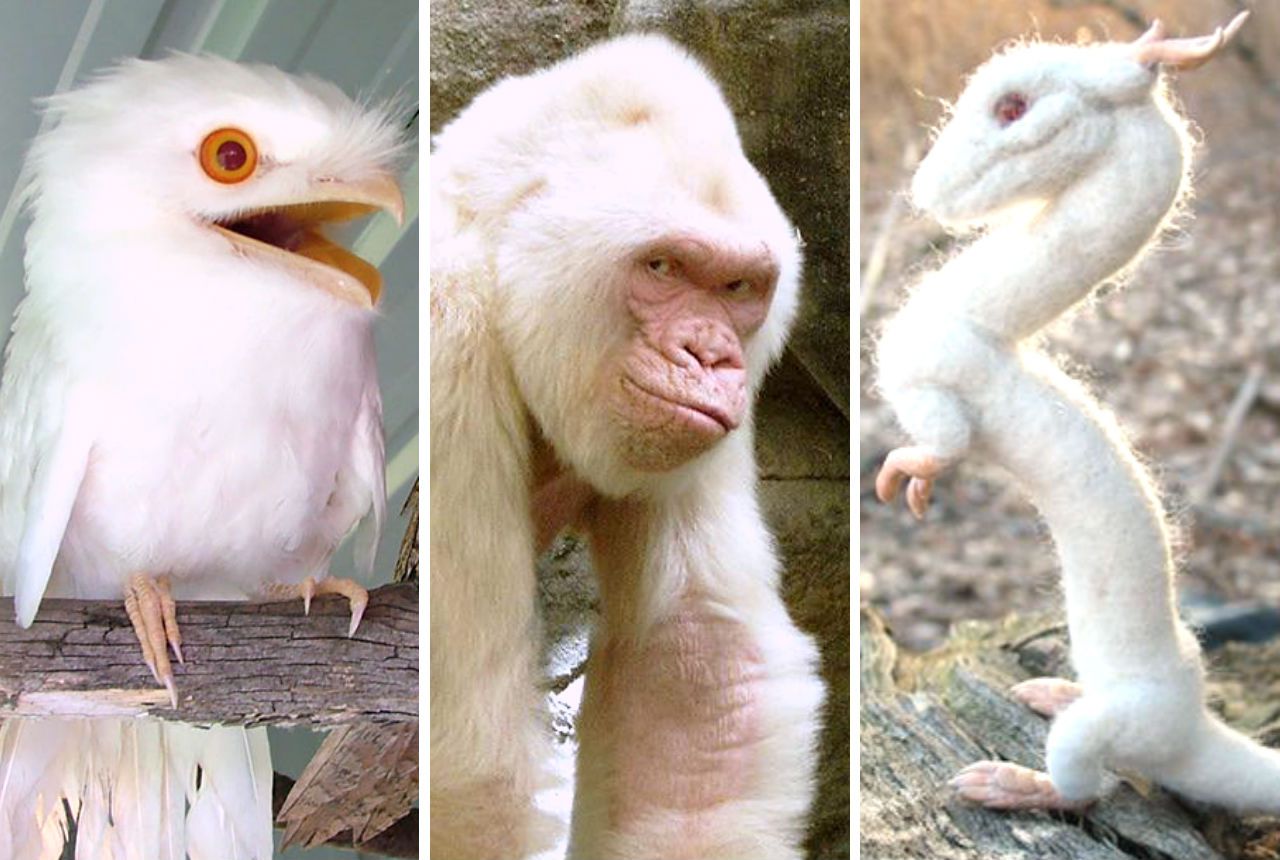 Scientists classify albinism as a partial or complete loss of coloring in hair, eyes and skin. In fact, this happens throughout biology. In other words, humans and animals alike can be albino. So do you want to take a closer look? Because these rare albino animals will amaze you…

Seen here is Snowflake, a unique captive albino gorilla in Barcelona, Spain, in December 1996. Snowflake lived at the Barcelona Zoo for 40 years until his death from skin cancer in 2003. He remains the only known albino gorilla in the world. His parents were an uncle and niece, resulting in his genetic mutation.

This photo taken on Sept. 12, 2018, shows a white albino Bengal tiger cub with its mother in a zoo in Bangladesh's second largest city, Chittagong. The zoo authorities reported is was the first white tiger born and being bred at a Bangladeshi zoo.

At the Gdansk Zoo in Pomerania, Poland, a new inhabitant appeared on March 22, 2019: a unique albino African Penguin (Spheniscus demersus) with amazing white feathering. These birds usually have black coloring with a clear white brow and can be up to 2 feet tall. This albino penguin was presented on a specially convened press conference at the Zoo.

This picture taken on April 12, 2012 shows a white albino alligator at the Alligator Bay zoological park in Beauvoir, France. Three albino alligators, two female and a male coming from the U.S., arrived at the park, joining the 200 alligators and crocodiles in their recreated natural environment, inside a tropical greenhouse.

An albino hedgehog sits on a palm of in a Zoo keeper in the Botanical Garden (Dendrarium) in the Russian Black Sea resort of Sochi, on Sept. 5, 2001. The hedgehog was found at one of the construction sites of the 2014 Winter Olympics.

A male baby albino South American fur seal explores with his mother, Harimee, in the outdoor enclosure at the zoo in Dortmund, western Germany, on July 20, 2012. The albino pup was born on May 26, 2012, and is the first of its kind to be born in a zoo.

Onya-Birri is an amazingly cute koala who joined the San Diego Zoo in 1998. He was the only albino koala available to the public in a zoo, and his name means "ghost boy" in the language of indigenous Australians. "We had no idea that either of Onya-Birri's parents carried the recessive gene for albinism," said Valerie Thompson, the zoo's associate curator of animals.

Albino kangaroos are rare in nature, with estimates putting their occurrence at only one out of every 50,000 to 100,000 kangaroos. In this photograph, an albino kangaroo named Nala is checked out by another kangaroo in their enclosure at the zoo in the northern German city of Duisburg.

An albino porcupine eats a corn cob in its enclosure at the Kamla Nehru Zoological Garden in Ahmedabad on Dec. 4, 2009. The zoo houses some 2,000 animals, ranging from mammals to birds and reptiles, and receives some 2 million visitors every year.

An albino macaque is seen in its enclosure at the Pata Zoo on Sept. 25, 2014, in Bangkok, Thailand. Located on the 6th and 7th floors of the aging Pata Department Store, the Pata Zoo is being criticized by animal rights activists for having cramped, inadequate facilities.

Pictured here, an albino zebra feeds in Nairobi's National Park on Oct. 3, 2008. Some researchers disagree on whether to call these types of zebras albino, due to ambiguity over whether a mere reduction in pigment rather than a complete absence of pigment qualifies as true albinism.

White Cloud, a certified true albino buffalo, grazed on the wild buffalo preserve at the National Buffalo Museum in Jamestown, North Dakota. White buffalo are extremely rare and are sacred to the Lakota and other indigenous Native American Tribes of the northern great plains in the U.S. White Cloud gave birth to 11 calves, including another albino buffalo named Dakota Miracle, before she died in 2016.

An Australian white humpback whale named Migaloo is the only documented white humpback whale in the world. His name means "white fella" in the language of indigenous Australians. The whale was first spotted in 1991. Since then, researchers have kept a close eye on him, proving thanks to DNA testing that he is indeed albino.

This is Twinkie, the largest albino reticulated python in the world. The snake lived a long and happy 11-year life before dying of natural causes at the Reptile Zoo in Fountain Valley, California. At more than 30 feet long, Twinkie made appearances on "The Tonight Show With Conan O'Brien" and even went viral on Tumblr.

Albino squirrels are rare. So when some American cities have found them, they've staked their claim to them. Both Olney, Illinois, and Marionville, Missouri, call themselves "Home of the White Squirrels." Olney's police department has images of the creatures affixed to their uniforms. Marionville's town historian asserts they've been there since the 1800s.

This baby albino turtle is adorable. Unfortunately, it has a tough life ahead. "Only one in 1,000 green turtles typically survives to maturity", according to Coolum and North Shore Coast Care president Leigh Warneminde. And an albino turtle's odds are even lower due to their increased visibility to predators.

"Everybody asks me 'Are they rare?'" said Harry Kunz from the Eagles Nest Wildlife Sanctuary. He's referring to a pair of albino kookaburras discovered in Queensland, Australia. Kunz explained why they seem so rare: "In nature they would not survive a few days out of the nest because their white colour sticks out and every reptile, owl or predator will get them."

If you think regular vultures are rare, popping up only in old Westerns, seeing albino turkey vultures must be akin to seeing Santa Claus. Just, you know, if Santa pecked the bones of dying prey. Thus, when 11-year-old Kylee Tyson saw one in Stuart, VA, that city's bird club assured her the specialness of her sighting.

This is Bertie, an albino peacock who roams the small town streets of England in search of a mate. While he's doing everything right from a peacock's perspective -- wandering around while "fanning his beautiful white feathers and dancing" -- there's just one problem. There are no female peacocks in the small town streets of England. "I made sure I locked my dogs indoors so they wouldn't try and eat him," said resident Rose Botting.

The giant gourami ain't named ironically. It can get up to 2 1/3 feet in length, towering over most fish you'd find in an aquarium. The fish was originally discovered in the isle of Java, where it is lovingly referred to as the "Water Hog". Its appetite is intense. They're ominvores who eat a lot, and some owners of the fish even report that they eat "cooked meat, bread, boiled potatoes and other vegetables".

Are albino elephants rare? Depends on where in the world you're looking. Asian albino elephants are relatively common, but in Africa, it's a much more surprising sight. However, Dr. Mike Chase of Elephants Without Borders remarked on these rare creatures' ability to adapt and survive: "Already the two-to-three-month-old calf seems to be walking in the shade of its mother. This behaviour suggests it is aware of its susceptibility to the harsh African sun, and adapted a unique behaviour to improve its chances of survival".

If you see a pink dolphin in Louisiana, you're not hallucinating. You're seeing Pinkie, the albino dolphin that's become a bit of a local celebrity. Captain Erik Rue, of the Calcasieu Charter Service, has been following Pinkie around, and recently proved that she was a female. "It's very stunning to look at," he said. "It's interesting to know things like that exist in the world and it's really beautiful to see that."

This deer suffers both from albinism and an irregular antler. Thus, wildlife photographer Mike Crowley dubbed him Broken Ear. Crowley discovered the animal in Wisconsin, noting his courage and fortitude. Despite Broken Ear's setbacks, he finds food, defends himself from predators, and even grew some of his antlers back.

For readers of a certain geographical area, chipmunks are pretty darn common. But if you ever see an albino one, take out a camera and capture the beauty, pronto. Norman Laramee of Loudon, NH stacked the deck, as one of these critters went into Laramee's backyard and ate some peanuts Laramee leaves in a bird feeder. Laramee plans on leaving more out for his new friend, whom he dubbed Whitey.

Unlike most of the animals on this list, albino catfish are actually pretty common. They even have "a versatile and adaptive ability to survive and thrive in a range of fresh water acidity and temperature", unlike other albino animals whose condition makes them easier targets for predators and environmental hazards.

Biologists Hernani Oliveira and Ludmilla Aguiar took this unique photograph of the first known albino specimen of a hoary bat. The researchers captured the adult male bat with a mist net in a gallery forest at the Águas Emendadas Ecological Station in the Federal District of Brazil.

If you saw an albino raven, you may just think, "That must be a seagull". And while blackness in color is typically an iconic part of a raven's image, these rare, all-white albino raven do exist. As wildlife blogger SeEtta Moss noted, these parts are much more susceptible to predators. Even other, "regular" raven tend to treat them differently.

It's no secret: The skunk stinks. But not always. They only secrete their smelly spray when they feel threatened, as a measure of last resort. In fact, some folks even keep albino skunks as a pet. They should be wary, though, as skunks are the primary carriers of rabies in the Midwest.